Today we have guest post by the Science Communicator Guru Randy Olson, who wrote an excellent book “Don’t Be Such a Scientist: Talking Substance in an Age of Style ” and has a great blog as well, The Benshi. The original is here.

Last Thursday night I was on a panel discussion at M.I.T. for Earth Day about communicating science in today’s information-overloaded world. On the panel was John Sterman of M.I.T. Sloan School of Management whom I met last December when he was in Los Angeles giving a talk (somewhat incongruously at the biggest talent agency in Hollywood to a crowd of entertainment industry gadflies). I found his presentation shockingly interesting, so when he invited me on Thursday to take part in his Climate Interactive simulation exercise the next morning, I figured why not.

He’s part of a team called “Climate Interactive” — a consortium including M.I.T., the Sustainability Institute, and Ventana Systems — who have assembled a simulation model about the climate fate of the planet which is simple enough for people to take part in a role playing version that only takes a few hours, yet opens your eyes up to the dangerous dynamics now unfolding in our planetary atmospheric experiment. He was on our Earth Day panel at M.I.T. on Thursday evening and invited me to join his presentation of the role playing game the next morning at a workshop, which I did.

For the first time I got a little bit of a simple intuitive feel for what the basic climate pattern is for this century. The overall game has three main data points with regard to climate, which are 0.75 °C — 1.35 °F — (how much temperature has risen since pre-industrial conditions), 2 °C — 3.6 °F — (what we can’t afford to go beyond) and 4.8 °C — 8.6 °F — (where we’re going to be in 2100 if nothing is done to change today’s patterns of emissions growth — what they call the “Business As Usual” or BAU projection).

That’s how it begins — with the challenge of, “How are you going to keep the planet from going past 2 degrees C?”

Remember what we’ve talked about here on The Benshi at length — how good stories and good scientific investigations and good documentaries all have at their core a single clear question. That’s exactly what makes this simulation exercise so effective. You know from the outset what’s at stake and what the goal is.

After haggling for a while, the groups then report what concessions they are willing to make. At the core of the entire exercise is a computer model, dubbed “C-ROADS”, into which these values are entered. What’s great is that the model responds immediately to the choices you enter. As the Rapidly Developing Nations agree to halt emissions growth in 2025 instead of 2040 you can instantly see the temperature in 2100 drop a few tenths of a degree. 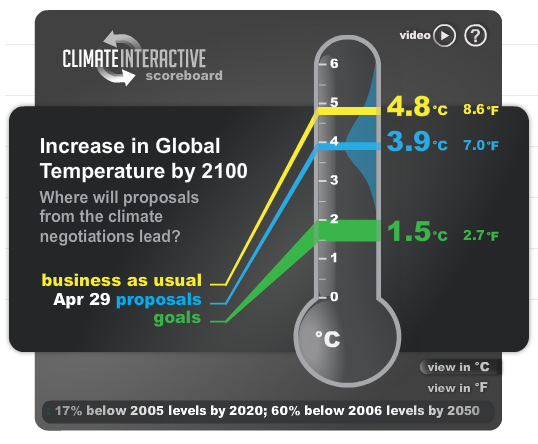 The Coolest Thing About the Climate Interactive Simulation: They update this figure with where the world currently stands in addressing temperature in 2100. As you can see, as of April 29 things are not looking good for your grandchildren.

The negotiation process runs in cycles as the groups get to watch the temperature in 2100 slowly drop, but actually getting it to rise no more than 2 degrees C (3.6 °F) turns out to require A LOT of hard work, compromise, and concessions.

And then John throws a wet blanket on the process by telling in detail about what he saw last December when he attended COP-15 in Copenhagen, where a global agreement to cut greenhouse gas emissions, once again, eluded the nations of the world. He closes, however, with a hopeful story about both the opportunities to reduce emissions through new technologies and what it will take to create the political and social will to implement them.

CLIMATEGATE:  A CALL TO DO NOTHING

So as I mentioned, I was on a panel discussion last Thursday night at M.I.T. about communicating science in today’s information overlaoded world, along with John Sterman. About halfway through the discussion, John was talking about the seriousness of Climategate when I felt the need to interrupt him and say, “You know, it’s been almost six months now since Climategate — has there been ANYTHING done to prepare for another such attack?”

The answer from all the panelists was an obvious “no,” prompting me to describe to the audience this clip from Monty Python’s “Life of Brian,” which I think paints a pretty accurate picture of what exactly has happened so far in response to Climategate — namely a lot of academics wringing their hands, outraged with a lot of discussion, a lot of thinking, a lot of PANEL discussions, and alas … a lot of nothing.

If another load of emails gets stolen, you’ll have the same science bloggers running to the same blogs to convey the same outrage while issuing the same assurances that there’s nothing to this.

THE CLIMATE SCIENCE COMMUNITY RESPONDS TO CLIMATEGATE:   ”This calls for a COMPLETELY new motion that there be immediate action, once a vote has been taken … ”

May 17 will make six months since Climategate.