“To save the spineless world from itself, supplying the truth isn’t enough. You need to supply the spine, too.” – Joe Romm 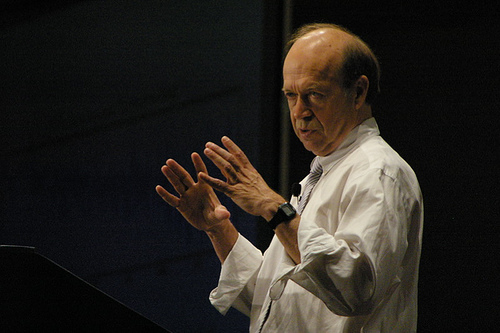 When NASA climate scientist James Hansen testified before the Senate Energy and Natural Resources Committee in 1988, it marked a watershed moment in history. Not only did it bring global warming into the public eye, it also set off a major alarm in certain corridors of power that business as usual was under attack.In the years that followed, Hansen was met with considerable censorship, mostly from NASA and the White House, as his efforts to raise public awareness about global warming intensified. But this did little to dampen his conviction, and today Hansen’s message rings louder than ever before.

Fellow climate expert Joe Romm may have summed up Hansen’s struggle better than anyone:

“We live in a spineless world,” he said as he presented Hansen with this year’s Ridenhour Courage Prize. “To save the spineless world from itself, supplying the truth isn’t enough. You need to supply the spine, too.”

There is a lot we can learn from Hansen’s story. He proved it _is _possible to take concrete action on climate change, even if the odds are stacked against you.

Atmospheric conditions haven’t improved since Hansen first testified before Congress, but the social and political landscape certainly has. Now, unlike then, climate change is a key pillar of the political debate in the U.S., Europe and around the world. Countless social movements have sprung up in response to global warming, some of them directly inspired by Hansen’s work. Record investments are being made in clean energy, while there is a near universal recognition of the need to ease off on the consumption of environmentally harmful sources like coal and fossil fuels.

With the wind now at our backs, it’s the perfect time to get involved in the fight against climate change. Just remember to bring your spine with you.