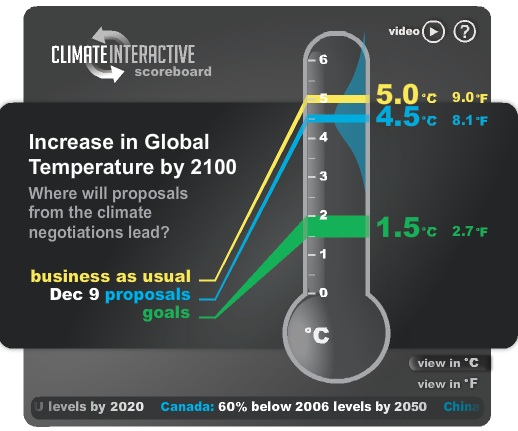 _Our Climate Scoreboard has been broadcasting the state of global climate commitments since 2009. At the Copenhagen climate negotiations “Climate Scoreboard” and its readings were found on a confidential draft of the Copenhagen Accord that was leaked to the Guardian. In the years since, even with negotiations in Cancun and Durban, the results of the Climate Scoreboard have changed negligibly. Below David Spratt at the blog Climate Code Red recently reviewed the tool. As ever, the scoreboard calls for more ambitious action, _as we work towards the day when the gap between climate proposals and climate goals is closed.__

This chart needs no explanation. The Climate Scoreboard is an online tool that allows the public to track progress in the ongoing negotiations to produce an international climate treaty. The Scoreboard automatically reports, on a daily basis, whether proposals in the treaty process commit countries to enough greenhouse gas emissions reductions to achieve widely expressed goals, such as limiting future warming to 1.5 to 2.0°C (2.7 to 3.6°F) above pre-industrial temperatures. And users can explore the analysis behind the numbers. At time of posting, the scoreboard projected an increase in global temperature of 4.5°C by 2100.

Its important to note that the calculations shown in the scoreboard and graphs relate to proposals by countries and country groups. They are not assessments of the actual progress made to fulfill those proposals. 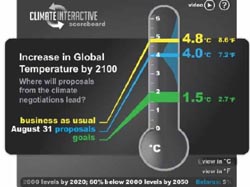 In January last year, I captured the scoreboard when writing a report on what 4 degrees of warming would look like. The image is at right.  What is disturbing is that between January 2011 and now (May 2012) the projected rise has increased a full half-a-degree Celsius, from 4.0C to 4.5C. And the reason is the deadly combination of political failure and rising emissions. According to preliminary estimates from the International Energy Agency, global carbon-dioxide (CO2) emissions from fossil-fuel combustion increased 3.2 per cent in 2011 compared to 2010, to reach a record high of  31.6 gigatonnes.

More than half of all carbon dioxide released into the atmosphere comes from five countries – China, the United States, India, Russia and Japan –  according to a national ranking of greenhouse gas emissions.

This emission boost runs in parallel with continuing international political failure, most recently with another bout of time-wasting failure in Bonn. So more than ever before the world looks headed for 4 degrees or more of warming, with consequences beyond our imaginations.