Since our January launch of The Climate Leader—a series of eleven video lessons on using systems thinking to make a difference on climate change—thousands have participated in the series and more are signing-up every day (you can enroll too).

We’ve gotten tons of great feedback about the course. And participants have followed along from all over the world. There’s someone watching from just outside Serenghetti National Park in Tanzania, another from a home in Mauritius, and then a group of co-workers at an international urban planning NGO that have made it into a group study. One participant, writing for the Fort Lauderdale Examiner, a local newspaper in the United States, published a full-length review of the series (see below). 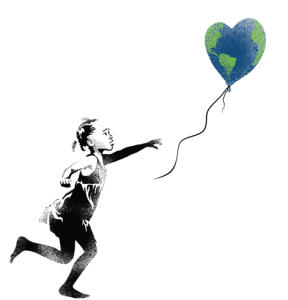 At Climate Interactive, we are fond of saying “it takes silver buckshot, not a silver bullet to address climate change.” Part of this means, that it will take everyone working on a multitude of different approaches. This sentiment was echoed at the massive People’s Climate March in New York City and in marches around the world last September where the message “to change everything, it takes everyone” was a prominent theme. While we each focus on our one part of the system, understanding how it fits into the whole is critical. We hope the trainings offered through The Climate Leader open the door to this systemic understanding of our world and help people feel better equipped to take action.

The effectiveness of communicating climate change and whole systems thinking

The video series, The Climate Leader presented by Climate Interactive, is a series regarding whole systems thinking. Intelligently broken down into key concepts and short clips, the ideas come across in tight, well written segments that build upon each other. Modeled in much the same way that the series is based upon, it is an interactive, integrated approach to effectively understanding and communicating the critical issue of climate change. 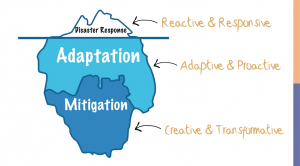 While the videos are kept to the point and may appear simplistic at first, they are strong in the same manner that Annie Leonard’s, The Story of Stuff and subsequent videos, are. Not fussy or complicated, presenting dynamic thinking in terms that are clear and easy to digest. Taking us through the series one step at a time, co-directors Beth Sawin and Drew Jones, take turns presenting information that is as easily accessible to a less informed audience as well as not overly simplistic for the better informed. Keeping true to their words of inclusion, there is a drawing of the audience into the material wisely using graphics to better disseminate and punctuate their ideas.

It is their stated objective to better enable communicators to do their work while seeing the big picture and the necessity for interconnectedness. Perhaps one of the more intriguing videos so far has introduced the concept of an iceberg. Certainly the irony of this particular choice is not missed, yet it proves to be an effective vehicle to convey a multiplicity of ideas pinpointing when change is systemic versus reactive or superficial. Stressing that sometimes our efforts do not need to be perfect; we are asked to consider perhaps that good enough is sufficient. A particularly important discussion revolves around feedback loops, balancing loops and compensating loops.

In one of the most convincing arguments to date why each person’s efforts count - in a positive reinforcing feedback loop, Beth Sawin states,

“your investment makes it easier for others to do the same.” 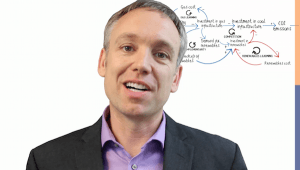 It is easy to grasp why each person’s efforts matter so much when taken in a larger picture frame.

Once you sign up for the video series, videos are emailed one at a time which eliminates the bother of having to remember to log in to continue. This convenience alone insures that participants will continue to follow the series, maximizing the potential benefit of Climate Interactive’s efforts. This is well thought out and very productive for those who want to broaden the scope of climate change education and engagement. It is easily shared with others and facilitates entry points for understanding and grasping the material.

I highly recommend the series. Its applications are numerous from conferences, to workshops, to educational settings to informal learning. With this kind of approach to the most critical issue of our time, it reinforces Beth Sawin’s comment during the video ’Reinforcing Movements‘,