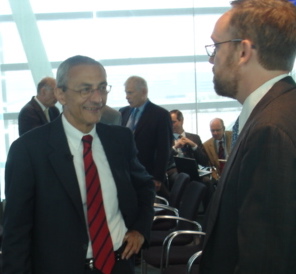 Got some good press in the Mountain Express about our climate simulation work.  Check out the dramatic lead…

The United Nations secretary-general speaks in grave tones to a room packed with officials from some of the world’s largest, most powerful countries. He’s called them together, he says, to help them save their nations by saving the planet. The situation’s getting desperate: A Category 5 hurricane has reduced much of Miami to ruins and urban swamps, and millions of people in India have become “environmental refugees” after a killer cyclone swept through Bangladesh. Meanwhile, deprivation and fighting escalate in conflict zones around the globe.

What still strikes me as so important in that simulated negotiation we did months ago now was the chance for Americans and Chinese people to talk together and listen to each other about their priorities, their concerns, and what it will take to mitigate and adapt to climate change.