Nations need to significantly strengthen the Paris pledges for emissions reductions between now and 2030 in order to limit projected warming below 2°C (3.6°F), according to new analysis released from Climate Interactive and MIT Sloan.

More than 150 nations are expected to sign the Paris agreement on April 22. However, full implementation of the current pledges would result in expected warming by 2100 of 3.5°C (6.3°F). Deeper, earlier emissions cuts are needed to limit warming to no more than 2°C. The Paris Agreement provides a mechanism for the nations of the world to increase their commitments through its “global stock-take” provision, under which nations can submit stronger pledges by 2020. 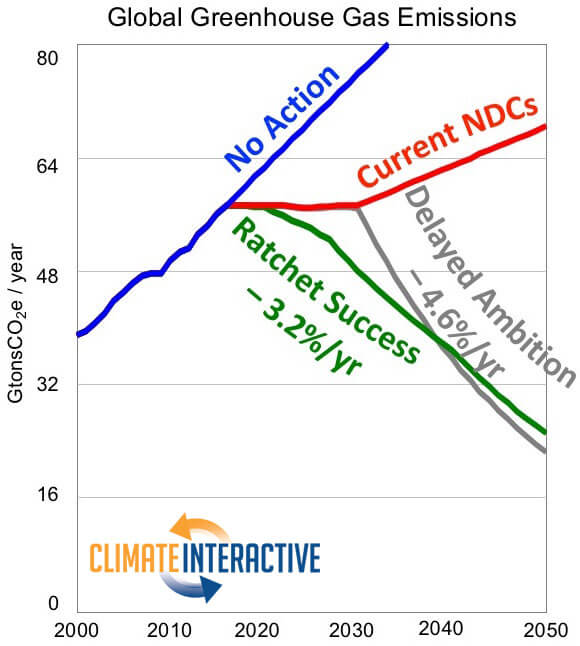 The Climate Scoreboard analysis from Climate Interactive and MIT Sloan shows that with each year that countries wait to strengthen their current pledges, the rate at which emissions must decline gets steeper and steeper. If countries only fulfill their current Paris pledges by 2030, our energy infrastructure, agriculture practices, and consumption habits will need to change prohibitively fast after 2030, lowering the chances of achieving the Paris agreement goal of limiting warming to no more than 2°C (and aiming to stay below 1.5°C). Between the impacts of climate change and the dramatic shifts in our economies if we delay, stronger action now is essential for a more secure future.

If the Paris pledges are improved as shown in the Ratchet Success scenario in Figure 1, then global emissions peak by 2020 and the rate of decline required to limit expected warming to the Paris goal is 3.2%/year, a rate that has been achieved by some nations in the past. If countries adhere to their Paris pledges, and then strive to meet the 2°C limit with stronger cuts after 2030, then global emissions would have to peak in 2030 and then decline 4.6%/year thereafter, a rate that would strand many fossil fuel assets (see the “Delayed Ambition scenario in Figure 1).

Under the “Ratchet Success” scenario, emissions for major emitters would fall sooner and farther than their current Paris pledges (Table 1), including: 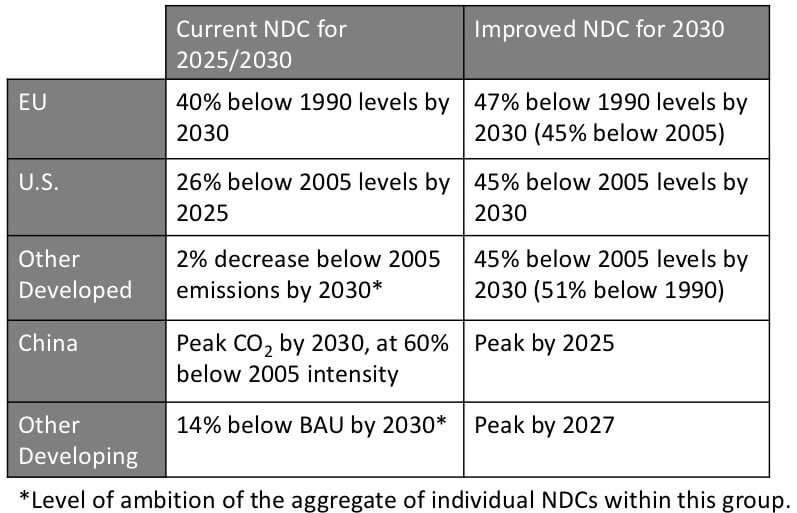 Table 1: Current and required pledges to limit warming below 2°C.

Climate Interactive’s Climate Scoreboard analysis of the current Paris pledges (“Current NDCs”) found that if, fully implemented, without further action, the Paris pledges would avoid about 1 degree Celsius of warming from business-as-usual levels, but this still puts the planet on a trajectory to 3.5°C (6.3°F) of expected warming in 2100, with a range of uncertainty from 2.1 to 4.7°C (3.7 to 8.4°F).

Andrew Jones of Climate Interactive said: “It is like driving to an important meeting. You could get there safely if you leave now. Or you could wait, drive too fast, and risk a horrible accident. If we improve the Paris pledges now, we can limit warming below two degrees. If we wait and only ratchet up pledges post-2030, then we’d have to reduce greenhouse gas emissions at a reckless and costly rate, scrapping much more of the existing fossil energy infrastructure before the end of its practical life.”

Dr. John Sterman of MIT Sloan said, “Paris is a major step. But the current pledges defer the emissions reductions needed to keep warming below 2°C until after 2030. By then, substantial additional fossil fuel infrastructure would be built, only to become stranded assets after 2030 at great cost to the companies that built them and the citizens of the nations who financed them.”

Figure 2 captures current pledges and improvements needed in 2020 required to limit warming to below 2°C (3.6°F) for five regions of the world. 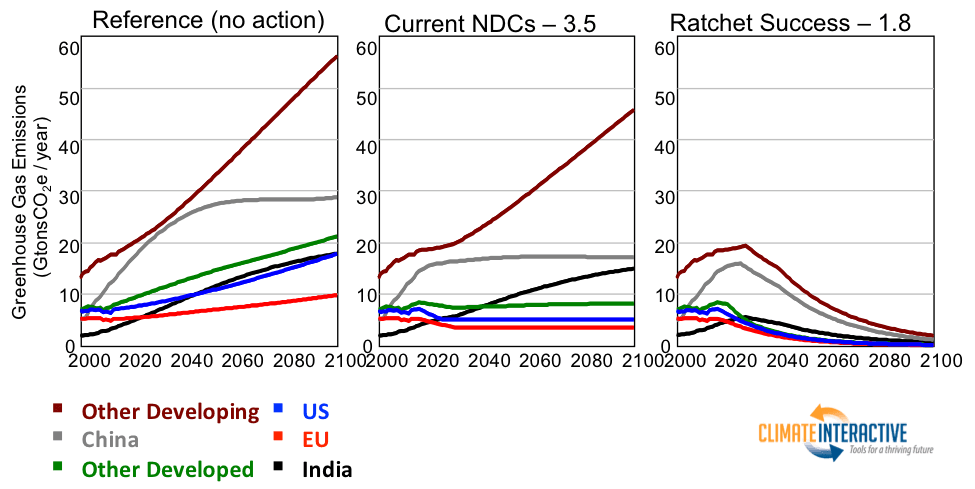 Figure 2: Greenhouse gas emissions from 2000-2100 for six regions of the world, under three scenarios.

The Climate Scoreboard analysis is produced by Climate Interactive in partnership with the Massachusetts Institute of Technology Sloan School of Management (MIT Sloan).

The Climate Scoreboard analyzes the nationally determined contributions (NDCs) put forward to the UN climate talks. The Scoreboard is calculated with the C-ROADS (Climate-Rapid Overview and Decision Support) computer simulation, which is calibrated to the Intergovernmental Panel on Climate Change’s (IPCC) Fifth Assessment Report results. C-ROADS is downloadable and available for public use.