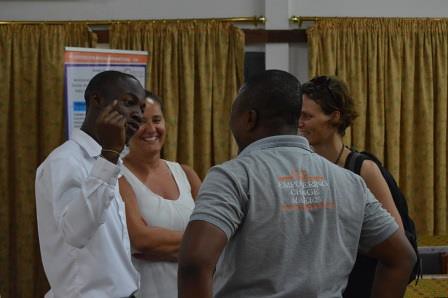 My second World Climate Simulation at the University of Cape Coast, Ghana, on the 16th September 2016, brought together exceptional environmental science students and researchers from the University of Cape Coast and visiting students from Norway, Sweden, and Denmark who were under Kultierstudier programme in the university. This allowed us to see how participants from the North and South can negotiate a global climate deal in a mock conference.

The event commenced with a brief introduction to climate change (covering science, impacts, and solutions) by myself and co-facilitated the event with Benson Adjei of Centre for Social Innovations and Dr. Laura Perreira. Benson Adjei, introduced the World Climate Simulation event to the audience and from facial expressions we could see a promising negotiations ahead of us.

There were about 100 participants who were grouped into the 6 negotiating blocs while designating 10 people as Press Corps and 12 people under the Climate Activist bloc.  Briefing notes were given to all blocs while the NDC proposal form was given to the 6 regions. We ensured that participants from Europe played the role of developing countries and those from Ghana played the role of developed countries. This helped them in better understanding the dynamics in other regions of the world.

Laura, a visiting lecturer from South Africa, played the Executive Secretary of the UNFCCC. She gave a wonderful speech to open the first round of negotiations. The 6 regions had about 15 minutes to read their briefings and make their commitments known to the mock conference through the proposal form. After submitting their NDCs, C-ROADS was launched and the submitted pledges were entered. Surprisingly, delegates from Other Developing countries exhibited high demand for funds (requesting for $70B per year) while also demonstrating a good willingness to act on climate (committing the maximum amount to stop deforestation). Other Developed countries also amazed us with their strong proposal of 8% fractional rate of decline per year while committing the maximum to stopping deforestation and promoting afforestation.

Putting all the data together, we reached global warming of 2.7degC in 2100. Although not our desirable target, the reach was much better than our previous event in Kumasi – where we reached 4degC after the first round of negotiations. To open the most exciting part of our event (2nd round of negotiations), Laura Perreira, our Executive Secretary of UNFCCC for the day urged all delegates to make their best commitments to reach a 1.5degC or maximum 2.0degC:

Further, playing the role of the UN Secretary General I emphasized that: -:

“Climate Change will affect everything we love as humans but more importantly, our food, water, and the air we breathe. As leaders, you have a one-time opportunity to make a change that will save our future. Planet Earth depends on you.” Joshua Amponsem, playing UN Secretary General

On this note, second round of negotiations began and the first bloc to make a move was the Climate Activists. They advised, as well as put pressure on, China, EU, and US to increase their financial contributions while limiting their CO2 emissions growth. EU and the Other developed nations seemed to have gotten along very easily as they both exerted pressure on Other Developing countries, China & India to increase their afforestation from 0.2, 0.6, and 0.7 respectively, to 1.

Following that, there was a sudden fierce argument over the EU bloc. Notes from the press corps indicated that EU was only willing to contribute significantly to the Green Climate Fund if China committed above 20% of the targeted fund and if US contributed up to 50% to the fund. Successfully, there was peaceful negotiations between the Other Developed countries and the US.

Additionally, India and Other developing countries formed a union of friendship. They presented a joint proposal to the US and China. China agreed to the proposal and gave $20b to GCF. EU also agreed to their proposal and acknowledged their responsibility contributing $30b to the fund and a 5% fractional rate of decline while starting their decline in 2060 instead of their previous commitment of 2080. However, activists spoke against that and the EU decided to stop emission growth at 2030 and started to decline in 2035.

India seemed very ambitious and the US was willing to give money rather than reducing their emissions. After about 50 minutes, all the countries submitted their terms and commitments. It was really difficult to put an end to the negotiations as many delegates were still engaging their colleagues in other terms and deals. It was really amazing to see the reaction of some of our participants from Europe who were representing India and other developing countries.

After feeding the second set of pledges into C-ROADS, we reached 2.4degC. Natasha Verco and I reiterated the impact of global warming and why it is necessary to stay below 2degC. With that, delegates from Other Developed nations and those from Other Developing countries swiftly opted to strengthen their commitment. They both increased their fractional decline rate to 10% per year and also decided to stop their emission growth at 2030 while they both committed fully to REDD and afforestation.

After these changes, our global warming decreased to 2.2degC. The room was full of suspension as everyone looked up to US to make a change. However, delegates from India and Other Developing Countries united to put up a proposal to China. They proposed that China increase their fractional rate of decline to 12% and US to move their REDD and afforestation effort to 1. US agreed to that but China only agreed to 10% instead of 12%.

Like magic, we reached 2degC with these changes. The house gave marvelous applaud to delegates who pushed for the changes that made it possible for us to achieve our target.

Participants gave their feedback during the debrief, some of which are very inspiring:-

“This is a nice experience and my first time to have such an exposure. I already feel like President Obama. It was great to have such a taste of decision making. I appreciate it and I think more of this should be happening on campuses.” Anonymous

“Developing countries had a tone of vulnerability and needed help. I think this is good because we are not the future leaders. We are the present leaders and very soon we might be taking similar roles at the international levels. So thank you organizers for bringing this training and I hope we will be ambassadors for Climate Change.” Sylvester Osei

“The event is so practical and we have been exposed to climate negotiations and have also had the chance to appreciate what delegates know what happens at the international level. As youth, we have been given an opportunity to be part of decision making and also to take up leadership role in environmental issues … Climate Change is real. Let’s try and do in our own capacity the very little we can do to make this 2degC realistic. It starts from us and we should take up the challenge.” Mm Hasana

“It was a perfect experience. We enjoyed discussing with each other – it was fun to be in debates with other countries and see what they are up to.” Anonymous