Climate Pathways App: A Climate Model for your Pocket

In taking our tools to new platforms to help people better understand the complexities of climate change, we have released the Climate Pathways app for the iPhone, iPad, or iPod.  This free app, available at the Apple App Store, enables people to chart a course to a future that limits global warming to 2 degrees. We developed the app with Todd Fincannon who took our C-ROADS simulator and did the heavy lifting to program it for iOS devices. While not as robust as C-ROADS, Climate Pathways shows people that reaching the widely held goal of 2 degrees will require a little more than just leveling off our emissions—a pathway that, while difficult, could still be achievable.

Todd has written up a little bit about the Climate Pathways, which I’ve reposted here:

My first app for iPhone and iPad has been published in the App Store by my development partner Climate Interactive. I started with the idea of publishing an ebook with embedded simulations to explain the science behind global warming and climate change. The climate system is complex with many surprises in its behavior. I thought it would be interesting for people to find out for themselves how delays in the system mean we have to reduce greenhouse gases now, before the really bad impacts have become apparent.

I needed a climate model that would run fast enough on an iPhone. This led me to Climate Interactive and their C-ROADS model. They work with policymakers, helping them understand how various greenhouse gas emissions scenarios will play out. Their first outreach to the public, the Climate Scoreboard, was a big success, and they wanted to do more. They had just developed a simplified climate model in JavaScript that I could embed in an iOS app.

When Drew Jones at CI proposed an app that would deliver the key insights in a focused way, I ditched the ebook idea and worked with the CI team on realizing Drew’s proposal instead. The result is Climate Pathways. 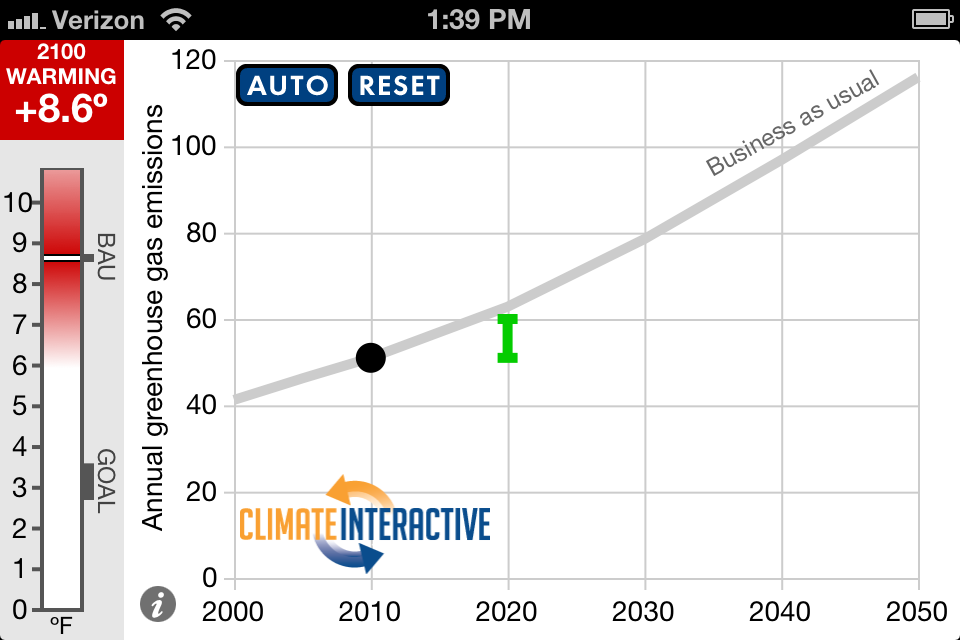 If you get stuck, you can try “auto mode” and sweep your finger around to find 2ºC pathways calculated by Lori Siegel at CI using the full C-ROADS model. The little info button gives you some background information on the climate system and our current situation.

The app page at CI features a demo video showing the app in action, narrated by Drew Jones of CI. This video shows how effective an interactive simulation can be for illustrating the behavior of a complex dynamical system.

The Climate Interactive team took iPads to the UN climate conferences in Cancun and Durban. People there really liked how it gets the point across. Hopefully, we’ll be able to do a lot more with it soon.

Testing C-ROADS for iPhone at COP16

So if you have an iPad, iPhone, or iPod Touch, head on over the App Store to download your free copy of Climate Pathways today!